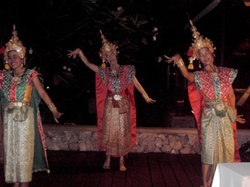 For a year during 2006-2007, Do Good Now worked voluntarily in Thailand. We spent a year with the Swedish microcredit foundation to help rebuild the infrastructure on the islands of Thailand after the tsunami disaster that struck the south Asian coastlines during Christmas 2004.

The Foundation provided microcredit to 250 small business owners and heads of families on Phi Phi Island. They were, for instance, fruit sellers, massage therapists, handicraft vendors and tourist guides with long-tail boats.

After three years, about more than 70% of the microloans were repaid. A very good outcome, considering that it was a disaster, where people were injured for life and died shortly afterwards. The money came from companies in Sweden and Swedish hotel owners in Thailand. Two locals with knowledge of the inhabitants and the culture were employed in the project to facilitate the work.

Our experience is that small projects with low costs work best. In a small, direct project, the money can be used for those who are in greatest need. In this case, Phi Phi Island’s habitants already had the know-how, the entrepreneurial skills as well as a wish to rebuild the society’s infrastructure and the island’s business. All they needed was temporary financial support. In these cases, microcredit finance is perfect.
More information about microcredit and microfinancing can be found here